The Redmi K30 Ultra smartphone was presented back in August this year, but its basic version became available for purchase only now.

The cheapest version of the Redmi K30 Ultra is currently available for pre-order at JD.com. Delivery is only promised from November 30th.

The smartphone, we recall, is equipped with a 6.67-inch AMOLED display with a frame rate of 120 Hz, a MediaTek Dimensity 1000+ 5G chip, a 4500 mAh battery and a main quad camera with a main 64-megapixel sensor.

Vingroup has partnered with Qualcomm to launch an ultra-budget 4G smartphone in Vietnam called the Vsmart Bee Lite, which costs just $ 26.

The novelty has received a 5.45-inch display with a resolution of 480×800 pixels. There is a 2MP selfie camera on the screen, while the rear has a 5MP main camera.

The heart of the smartphone is the Qualcomm Snapdragon 215 chipset, working in combination with 1 GB of RAM and 16 GB of internal memory. If necessary, you can expand the storage using a microSD card. 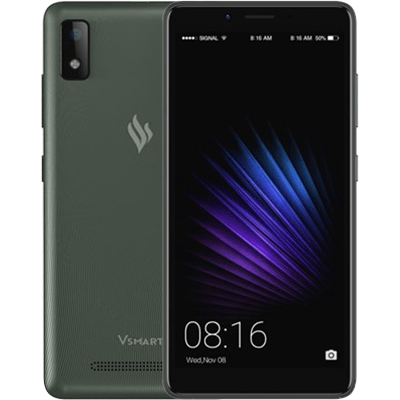 Due to the small performance, the Vsmart Bee Lite runs Android 10 Go Edition and has a 2550mAh battery. It will be available for purchase in two colors – black and gray.

Huami is preparing for the imminent announcement of the new Amazfit GTS 2 Mini smartwatch, which has already passed the FCC and other regulators certification.

The announcement of the Amazfit GTS 2 Mini should take place before the end of this year. The expected novelty has model number A2018.

As you can see in the images provided, the device has a small square black and white display with fairly thick bezels. There is one physical control button on the right side.

In terms of design, the Amazfit GTS 2 Mini is somewhat reminiscent of the Amazfit Bip model. There is no information about the cost yet, but it is unlikely that it will exceed $ 40. 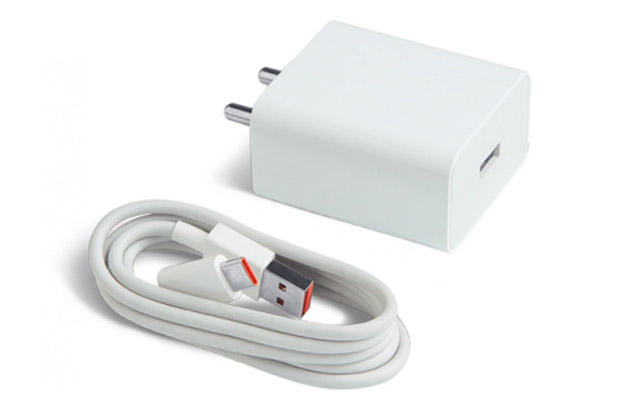 The body of the charger is made of polycarbonate. It has overvoltage protection 380 V. Charging can be carried out with the following parameters:

Pine64 is known for its smartphones, tablets, smartwatches, laptops and other devices based on the Linux operating system.

PinePhone smartphones from Pine64 use different Linux-based operating systems. The model name is determined by the pre-installed OS and the system software logo on the back of the device.

The first production-ready Linux-based PinePhone was introduced in August this year… The company has now teamed up with the developers of the KDE project to release the PinePhone KDE Community Edition.

It includes all the necessary sensors such as accelerometer, gyroscope, proximity, barometer and compass. For connectivity, it is equipped with 4G, single band Wi-Fi, Bluetooth 4.0, GNSS (GPS, A-GPS, GLONASS). It also has a 5MP rear camera, a 2MP front camera, a 3.5mm headphone jack and a USB Type-C port. 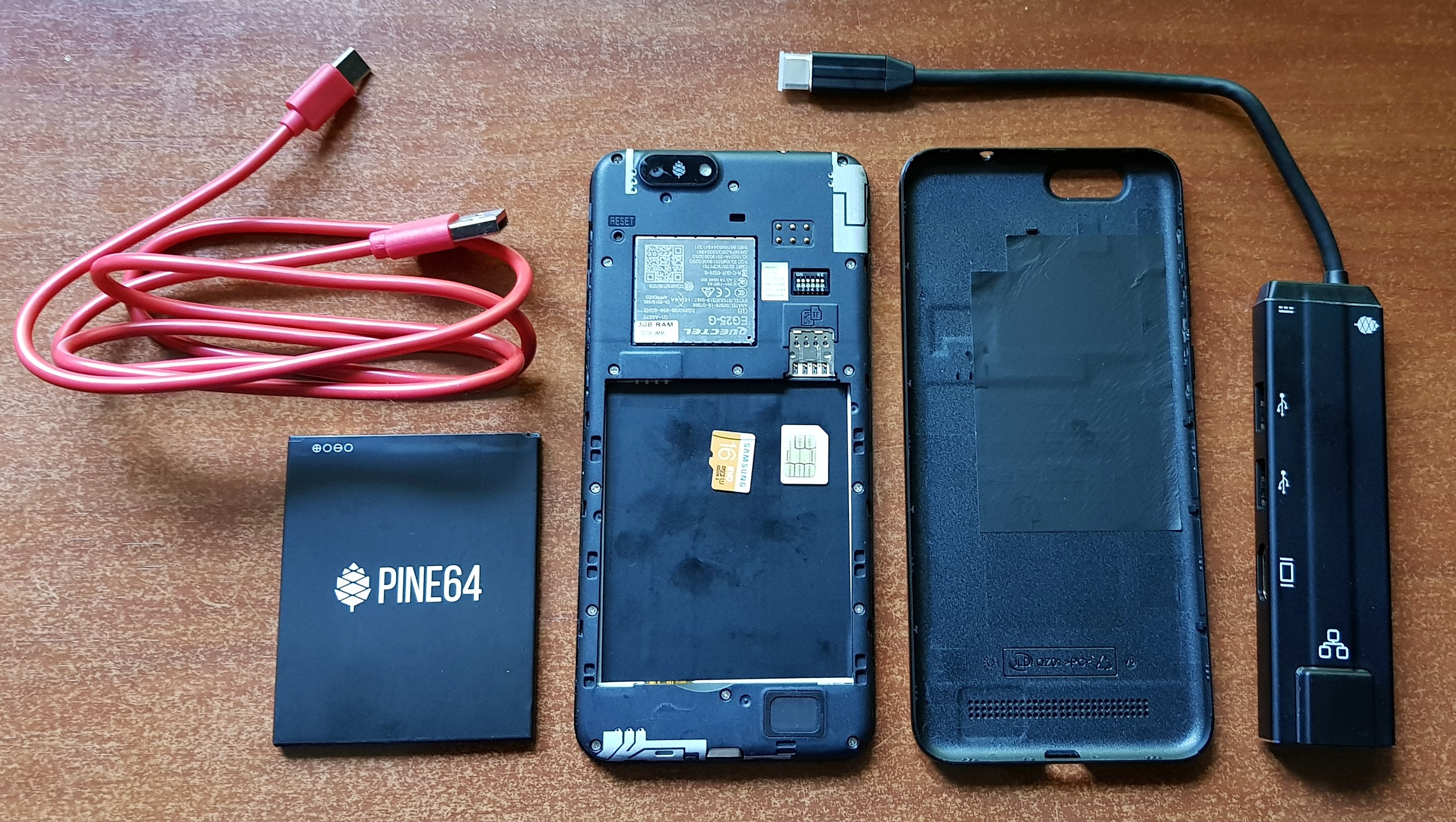 The design of the phone is distinguished by a case with a glass surface effect, colors inspired by precious stones, and a contrasting chrome-plated metal frame on the side edges.

Raun Forsyth, head of design at HMD Global, said: “There is something unique about expressing your style through technology. Usually everyone talks about different levels of premium smartphones. With the Nokia 8000 4G, we want to give push-button phone users a chance to express themselves not only with technology, but with an exclusive look that fans of the brand will know well. Durable 3D keys provide maximum comfort while using stylish chrome side edges and four color options to further enhance their individuality. The Nokia 8000 4G is a premium push-button phone ideal for all lovers of simplicity and sophistication. “ 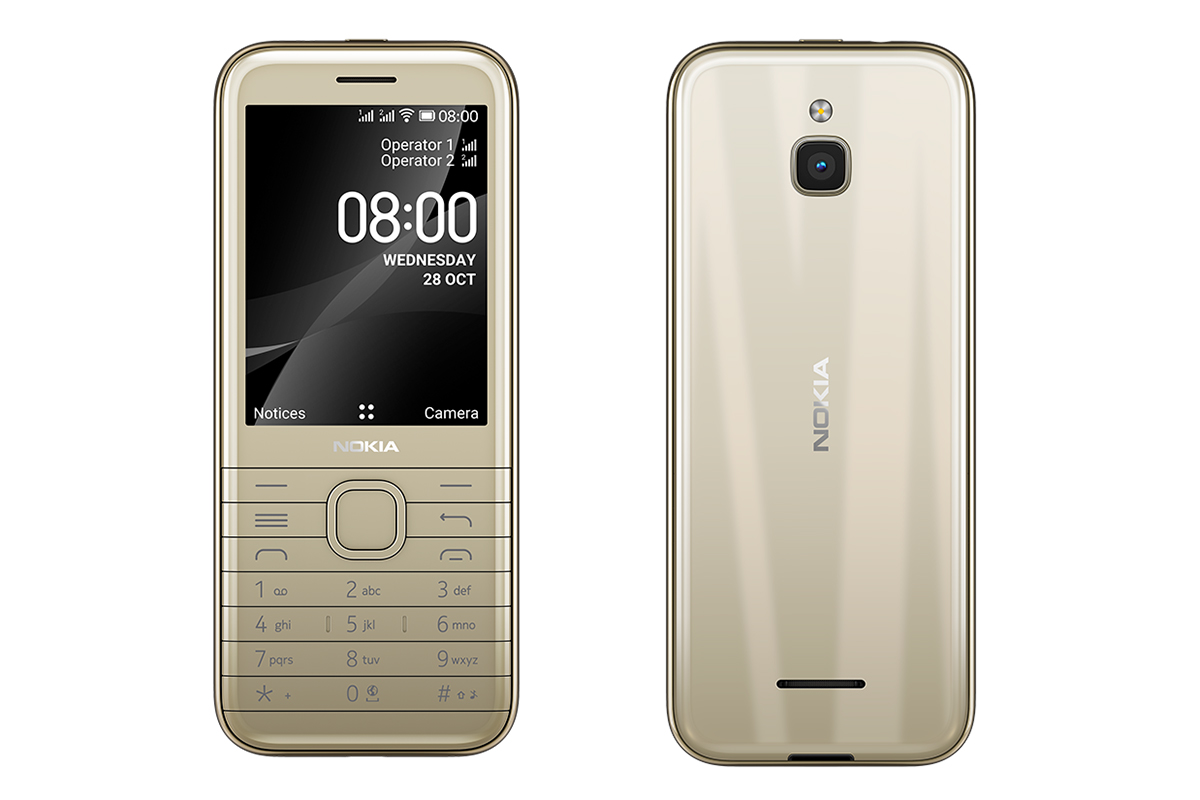 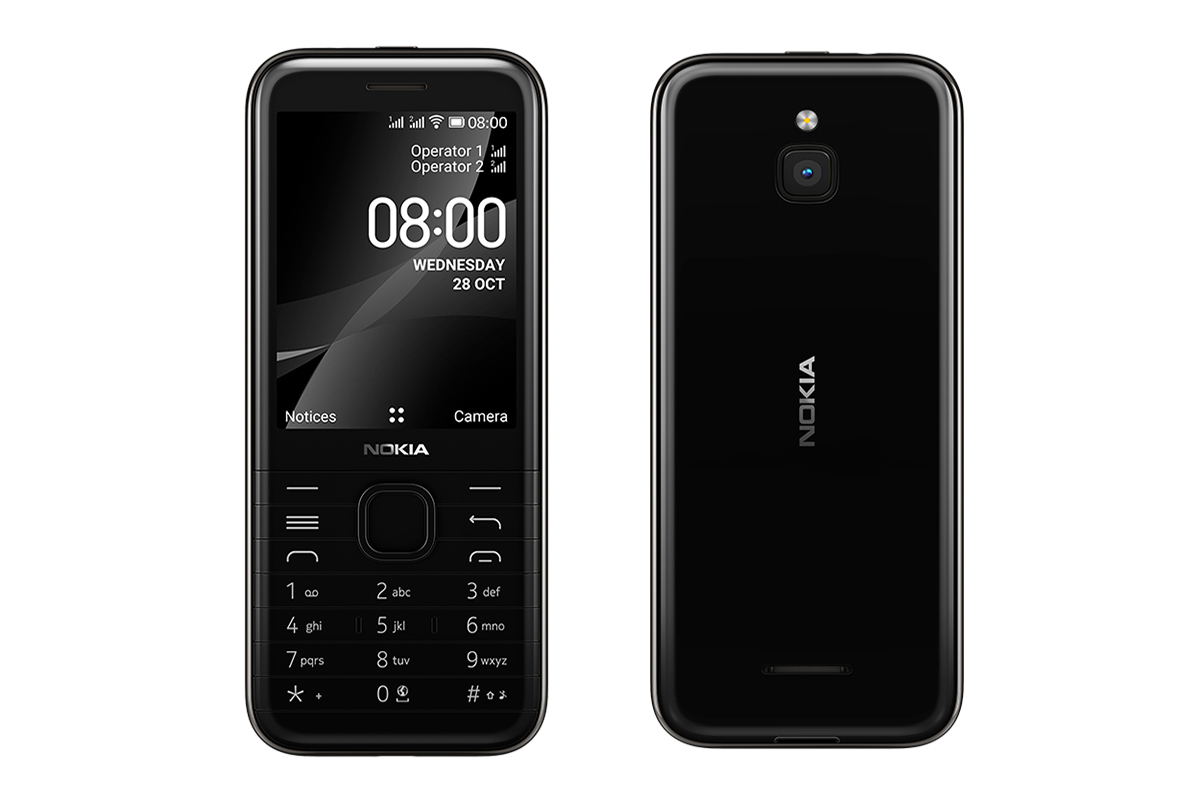 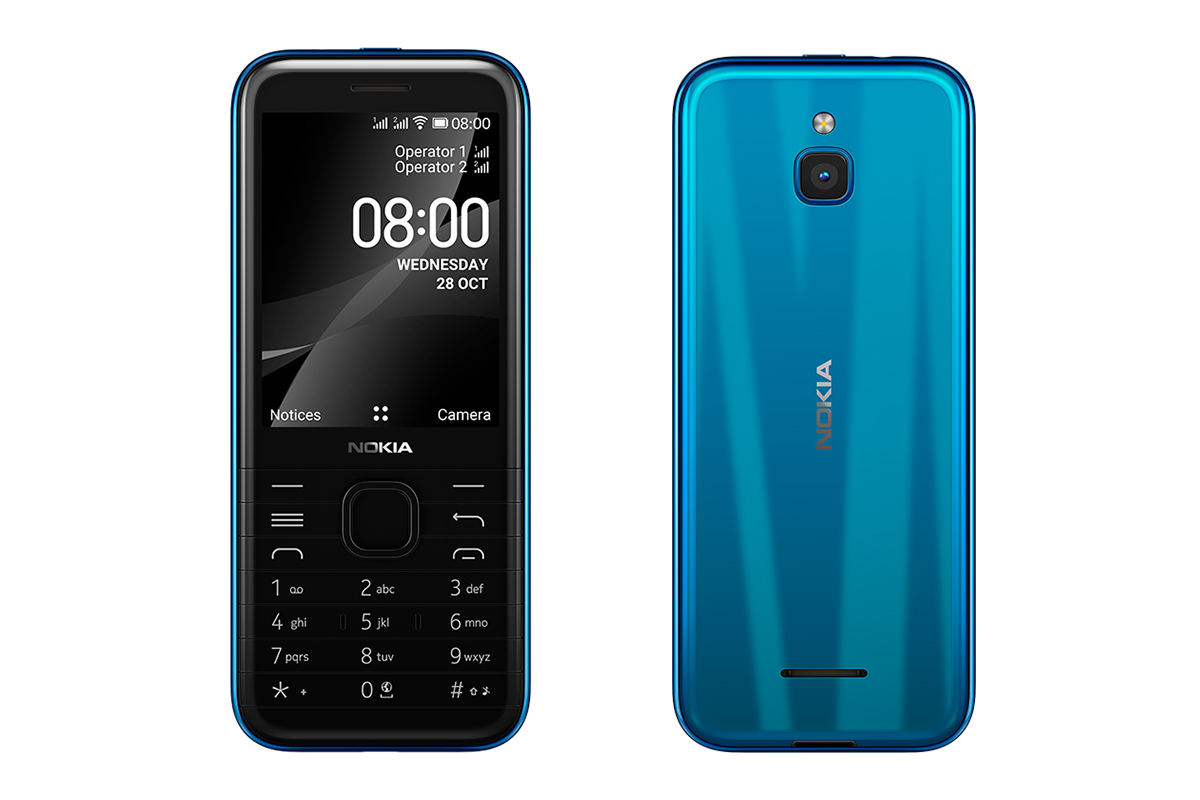 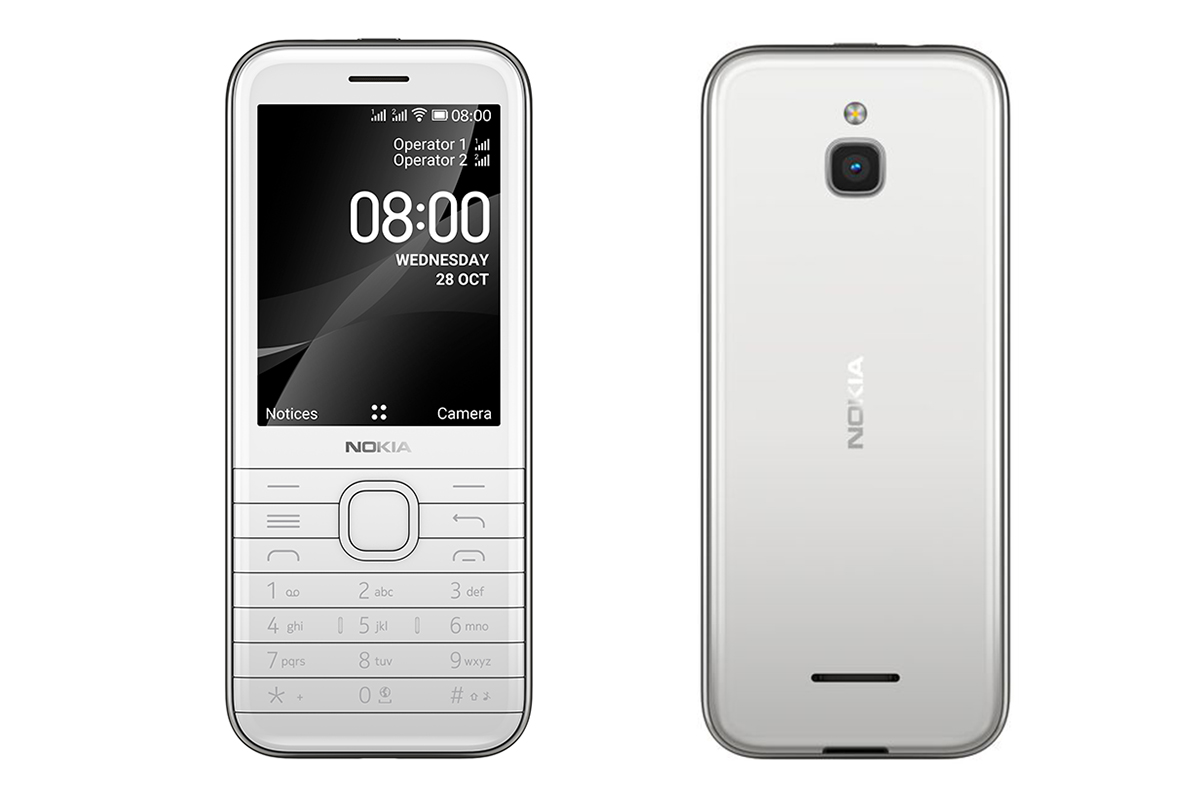 What else is interesting about the new Nokia 8000 4G:

Nokia 8000 4G will appear in Ukraine in December at an estimated retail price of UAH 2 599 in black, the availability of other colors will be announced later.

Realme has announced the conquest of another very serious bar in the smartphone market.

As part of the Festive Days sale in India, the Chinese manufacturer was able to sell over 8.3 million devices, of which 6.3 million were smartphones. The last year’s figure was improved by 20%.

By the way, not so long ago Realme was recognized as the fastest growing brand in the mobile market. In just 2.5 years, she was able to sell over 50 million smartphones.

Realme is not obsessed with smartphones, but is trying to expand its product range with other products, including wireless headphones, smart watches, smart plugs, smart TVs and so on.

Smartphones are already available in over 35 countries around the world. As usual, impatient buyers from Australia and New Zealand were the first due to the time zone difference. After them – the countries of the Asia-Pacific region, the Middle East, Europe and North America.

Customers in Brazil, South Korea and 25 other countries will have to wait a little longer, with pre-orders starting on November 20 and actual sales on November 27.

iPhone 12 mini is the smallest, thinnest and lightest 5G smartphone on the market, and the 12 Pro Max is Apple’s largest iPhone with a 6.7-inch Super Retina XDR OLED display.

The cost of the iPhone 12 mini is:

The incident took place in Northamptonshire, on the M1. Several intruders attacked the driver and the guard, tied them up and hijacked the truck.

According to preliminary data, new equipment was transported in the car Apple… Most of the devices are iPhone 12 smartphones. The stolen property is estimated at at least £ 5 million.

The attackers changed the vehicle several times, overloading the stolen goods, and thus covering their tracks. At the moment, the police are trying to track down the criminals.

In various forums, including official ones, complaints from users of Xiaomi, Redmi and Poco smartphones about the MIUI 12 update began to appear.

It is reported that the device is almost cyclically rebooting after installing the update. In rare cases, it is possible to reset the device to factory settings, but all data is lost.

According to one of the versions, this behavior of the smartphone may cause a certain conflict of the MIUI 12 software with the applications of some operators. For example, uninstalling Airtel applications in India solves the problem for some.

@IndiaPOCO Hi Poco Team, Recently I bought poco x3 mobile, yesterday I got new update called MIUI 12.05 stable. After updating it. I’m facing an issue called “Find phone closed unexpectedly”. I can’t be able to use my mobile it continuously restarting if open the mobile.Please help me pic.twitter.com/9wDAJh1kpt

At the moment, similar complaints are coming from the owners of Poco X3 NFC smartphones, Redmi K20 Pro, Redmi Note 7 Pro and Redmi Note 9 Pro Max. Official comments from Xiaomi on this account has not yet been reported.